Eat well for a long and healthy life – that’s a mantra that we’re all familiar with, but what are the best foods to help us achieve that goal? In this article, we give you an overview of some of the most healthful and nutritious foods.

Official figures indicate that, currently, the top three countries in the world with the highest life expectancy are the Principality of Monaco, Japan, and Singapore. These are places where the inhabitants experience a high quality of life, and an important element of that is eating healthful meals.

Often, we find praise for “superfoods” in the media – foods so high in nutritional value that they are seen as dietary superheroes.

Nutritionists reject the term “superfoods” as a buzzword that can influence people to place too high an expectation on a limited range of foods when, in reality, a balanced diet and healthful lifestyle require more effort than eating your five-a-day.

Still, there are certain foods that are more nutritious than others, and many that, as research has shown, have a protective effect against a range of diseases. Here, we give you an overview of some of the best foods that you may want to consider including in your diet in your quest for a happy, healthy life.

Edamame, or fresh soybeans, have been a staple of Asian cuisine for generations, but they have also been gaining popularity on the Western front of late. Soybeans are often sold in snack packs, but they are also added to a varied range of dishes, from soups to rice-based meals, though they are served as cooked and seasoned on their own, too.

The beans are rich in isoflavones, a type of phytoestrogen – that is. plant-derived, estrogen-like substances. Isoflavones are known to have anti-inflammatory, antioxidant, anti-cancer, and antimicrobial properties.

Thus, they can help to regulate the inflammatory response of the body, slow down cellular aging, fight microbes, as well as, reportedly, protect against certain types of cancer.

Edamame are rich in two types of isoflavones, in particular: genistein and daidzein. A study covered last year on Medical News Today found that genistein could be used to improve breast cancer treatment.

In the meantime, the study authors note that “lifetime intake of soy […] has been linked to reduced risk of breast cancer,” so we may want to include soybeans in our normal diet.

Similarly, tofu, a white cheese-like product made of soybean curds, has been linked to a wealth of health benefits for the same reasons. Tofu is often found cooked in typical Eastern Asian dishes; it can be fried, baked, or boiled (for instance, in soups).

As a soy product, it is rich in isoflavones, whose health benefits we’ve outlined above; it is also a good source of protein, and it contains all the essential amino acids that our bodies need to synthesize protein.

Moreover, it is also rich in minerals, which our bodies need to keep our teeth and bones strong and healthy, and to derive energy. Tofu is a source of calcium, iron, manganese, selenium, phosphorous, magnesium, zinc, and copper.

Some specialists also suggest that eating tofu can make you feel fuller for longer, so incorporating it into your meals may help to prevent overeating. 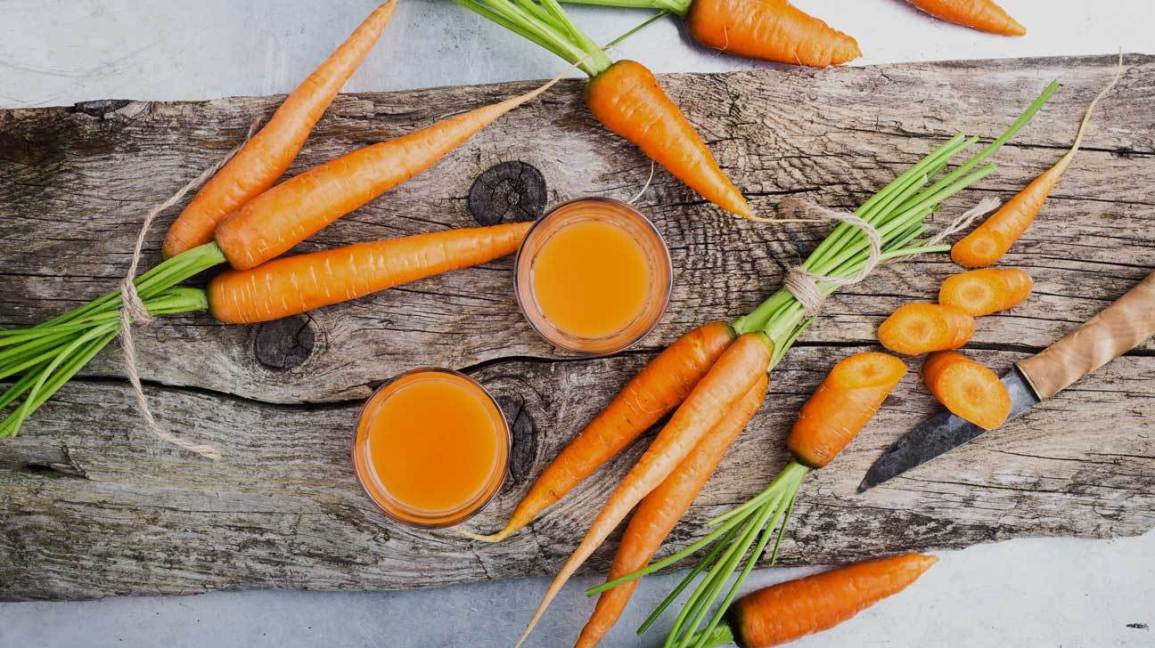 This common culinary ingredient, best known in its orange variety, is famously recommended for its high content of beta-carotene, a pigment — and carotenoid — that gives the widespread version of this root vegetable its color.

Beta-carotene can be converted by our bodies into vitamin A, which, according to the National Institutes of Health (NIH), “is involved in immune function, vision, reproduction, and cellular communication.” Our bodies cannot produce vitamin A on their own, so it must be derived from our diet.

This pigment is also an antioxidant that can protect the cells in our bodies from the aging damage caused by free radicals.

Moreover, research has shown that foods rich in carotenoids — and, of course, carrots are a prime example here — can protect against age-related macular degeneration, the vision damage caused by old age.

Some varieties of carrots, such as white carrots, do not contain the orange pigment beta-carotene, but they do all contain falcarinol, a nutrient which, some studies claim, may have a protective effect against cancer.

While raw carrots may be best for health, as they retain their nutrients, there are also ways of cooking carrots that can keep most of their nutrients “locked in.”

In an interview, one researcher who investigated the anti-cancer effect of falcarinol from carrots, Kirsten Brandt — from Newcastle University in the United Kingdom — suggests that we may want to boil our carrots whole if we want them cooked, but still bursting with nutrients.

“Chopping up your carrots increases the surface area so more of the nutrients leach out into the water while they are cooked. By keeping them whole and chopping them up afterwards you are locking in nutrients and the taste, so the carrot is better for you all round.”

Another important type of food on our list are cruciferous vegetables — also known as “Brassica vegetables” — which include a wide array of green foods, such as cabbage, broccoli, Brussels sprouts, cauliflower, bok choy, radish, and kale.

Cruciferous vegetables also contain glucosinolates, the substances that give these greens their characteristic pungent flavor. These substances have been found to bring diverse health benefits.

Some glucosinolates seem to regulate the body’s stress and inflammation response; they have antimicrobial properties, and some of them are being investigated for their anti-cancer potential.

One recent study covered on MNT found that leafy greens, including some cruciferous vegetables such as kale and collard greens, helped to slow down cognitive decline. Consequently, the study researchers suggest that “adding a daily serving of green, leafy vegetables to your diet may be a simple way to foster your brain health.”

Kale, broccoli, and cabbage have also been shown to have a protective effect on heart health, thanks to their vitamin K content.

Finally, cruciferous vegetables are also a great source of soluble fiber, which plays a role in regulating blood sugar levels and diminishing the absorption of fat, thus helping to prevent excess weight gain. 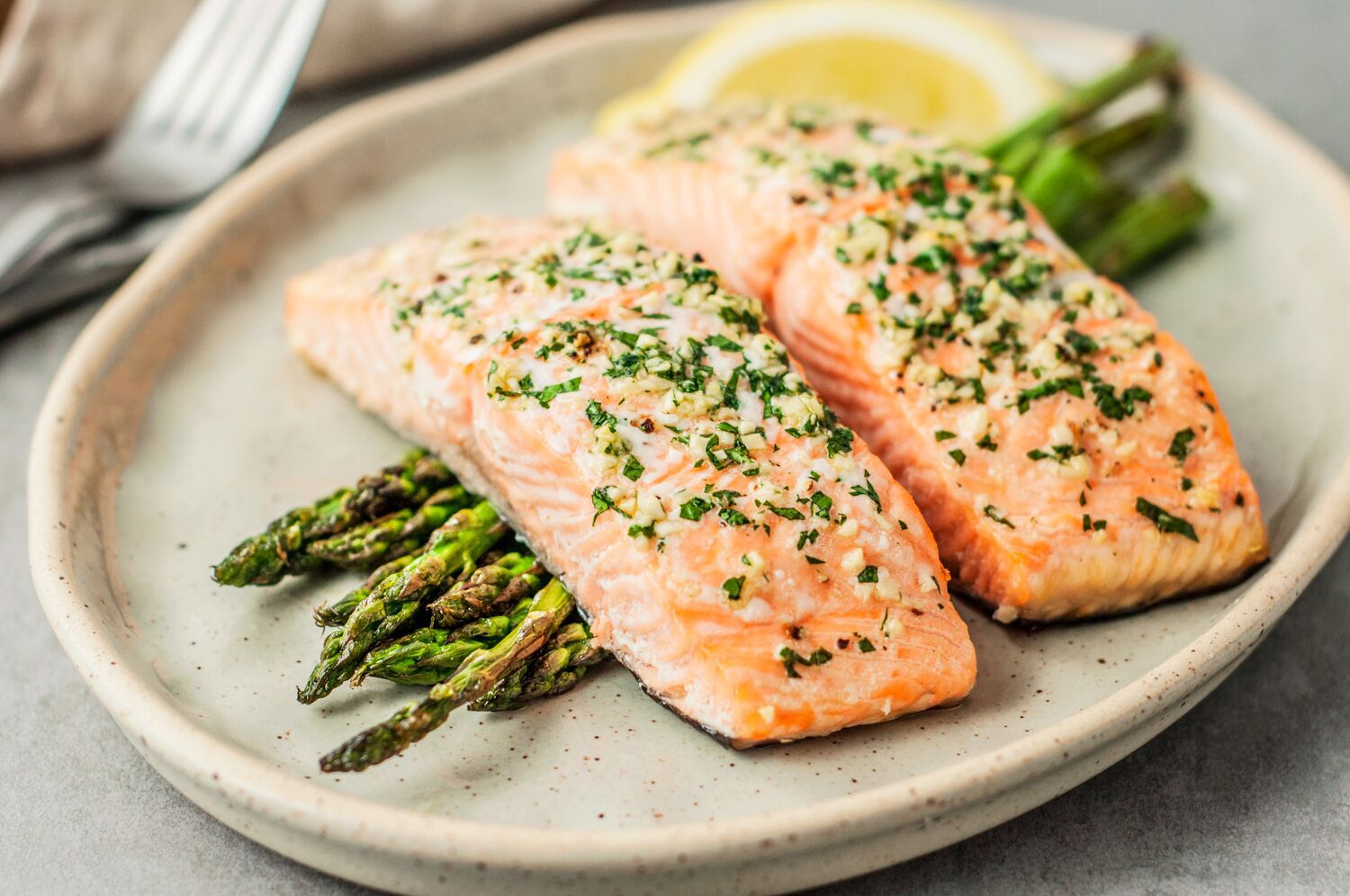 Recent studies have suggested that consumption of meat — mostly red meat, but also some kinds of poultry meat — could be harmful to our health in the long run. A good alternative for protein in this case is fish, and salmon, in particular, affords many nutritional benefits.

Salmon is packed with protein, and also contains plenty of omega-3 fatty acids, which is said to be beneficial for eyesight. Research has demonstrated that omega-3 protects against dry-eye syndrome, characterized by insufficient lubrication of the eyes, which can lead to soreness and blurred vision.

Salmon also has a high potassium content and, according to a new study reported on MNT last autumn, potassium can prevent the onset of heart disease.

Additionally, this type of fish is rich in the mineral selenium, which contributes to the health of the thyroid gland. The thyroid gland helps to regulate hormonal activity and is involved in metabolic processes.

Although both farmed and wild salmon are available on the market, wild salmon has been found to be more nutritious overall, with a higher protein content, and also to have less saturated fat, which means that it is more healthful, and better for weight management.

However, farmed salmon is a more sustainable resource, and specialists say that the differences between farmed and wild caught salmon may not be so stark as to motivate us to prefer one type over the other.

Finally, citrus fruits are the unsung heroes of a healthful diet; these include a number of fruits that are now available worldwide, such as oranges, grapefruit, lemons, limes, clementines, mandarins, and tangerines.

For a long time, citrus fruits have been recommended by nutritionists and grandmothers alike for their high content of vitamin C, which has antioxidant properties, and is said to bring a wide array of health benefits, including to reduce inflammatory damage, and to fend off infections.

Specialists point out, however, that this type of fruits goes well beyond just vitamin C when it comes to nutritional content.

If this list of dietary goodies hasn’t colored you impressed, the specialists then go on to explain how citrus fruits contain even more organic compounds — such as flavonoids, coumarins, and carotenoids — that have been said to have protective effects against cancer, cardiovascular diseases, and neurodegenerative diseases.

Research has shown that flavonoids — in which citrus fruits are particularly rich — can “prevent or delay chronic diseases caused by obesity.”

Flavonoids have also garnered a lot of scientific attention for their anti-cancer potential, and consumption of especially flavonoid-rich citrus fruits has been associated with a significantly prolonged lifespan.

The inhabitants of the Japanese prefecture of Okinawa, known to be some of the longest-living populations of the world, regularly eat shikuwasa, also known as “shequasar,” a citrus fruit typical of the region, which contains more flavonoids than most other citrus fruits.

Although all of the foods mentioned above are appreciated for their significant health benefits, we should not forget that well-being and longevity cannot be achieved without a balanced, inclusive diet and a healthful lifestyle.

Moreover, current studies suggest that our genetic makeup may have an important say as to which foods work best for our health. So, keeping our list of nutritious foods in mind, make sure you follow the healthful diet that is most effective for you!